I love Austin Kleon’s advice on how to read more (although teachers work really hard at communicating to students how to avoid #4). Students in my 11th grade English class and I created photo illustrations for each piece of advice because we love to read! 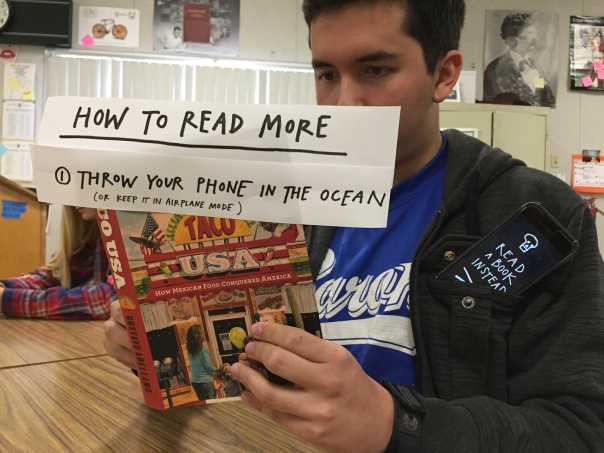 Dylan loves to read about tacos! Who doesn’t?

Erika’s ready to chuck that book! Students aren’t used to this luxury. It gets better!

Teachers struggle to help students enjoy the books they read in class. It’s a tough gig and unfortunately our efforts sometimes have the opposite effect. 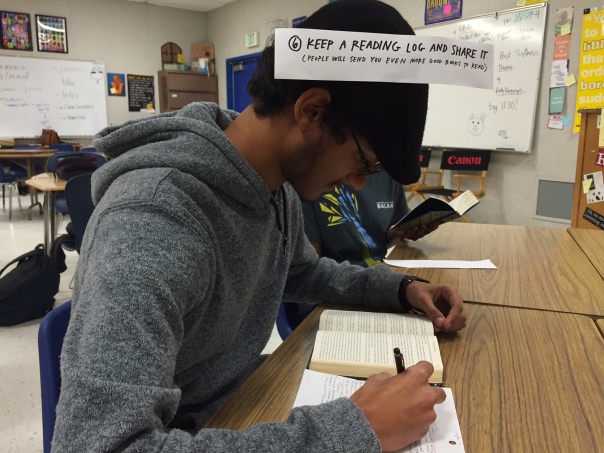 Jonathan tracks his reading. Many of my students blog about what they’re reading and thinking. Check out their blogs here.

About a year-and-a-half into my teaching career I cribbed an in-class activity from Austin Kleon: newspaper blackout poems. But I didn’t want to do them exactly like Kleon. I wanted to tie it closer to my curriculum. At the time I was teaching juniors and freshman, and among lots of other things we read The Catcher in the Rye and Fahrenheit 451 at those levels, respectively. So I scratched out “newspaper,” replaced it with “novel,” and armed my students with black Sharpies, crayons, Crayola markers, anything I could get my hands on. Oh and of course they each had a couple pages from the novel we were reading.

I love poetry but I never actually write it, so this was an interesting way to try it out. —Melissa

I especially like the prompt I gave my freshmen students who were reading Fahrenheit 451. At one point in the novel, the protagonist, Guy Montag, is running from the police who are recording the pursuit and Montag imagines himself being caught and wonders what he could say, with millions watching, “in a single word, a few words, that would sear all their faces and wake them up.” So I instructed my students to imagine themselves in Montag’s place and come up with a blackout poem, boil down words from the novel into something, that would get everyone’s attention, that would shake everyone out of their comfortable numbness.

Here are a couple examples from that first year:

Kleon himself says he struggles with teaching people how to create a blackout poem and as you can see from these examples, my first attempts at teaching them varied widely, visually at least.  While different students put a little more care into how they looked than others, each of these 9th grade boys created poignant little poems.

I shared my student work with Kleon who generously posted it along with my presentation to his website. The students were thrilled. Six years later and students are still impressed by that. It just goes to show you how hungry students are to break out of the classroom walls once in a while. It’s never enough really.

I felt like this blackout poem was really different from what we have been doing, so it felt pretty nice to do something new. —Hannah

After using blackout poems for a few years I wanted to do more with them, “plus one it” as my friend David Theriault likes to say. Year after year, I’d pass out the same two pages from the novels and frankly, I grew tired of looking at the same source material, so a couple years ago I decided to hand out different pages to each student. Then the idea struck! Why don’t we collaboratively black out an entire novel?!?

That’s exactly what we did. It’s a bigger project than I first imagined, so it’s taken my students and me a couple years to complete. They did their part. It took some organization and focus on my part to bring all the student work together and even then I needed my students’ help and so a few of them stepped up during the last week of school this year and helped me scan, tag, and queue our first blacked-out novel: The Catcher in the Rye.

At present, we’ve posted just under half the novel. I’ll continue to post one poem a day until we exhaust the pages. Then what? Well, we’ll start working on another novel. Probably one of the more hefty novels we read: The Scarlet Letter or The Grapes of Wrath.

On a pedagogical note: I don’t use a rubric for this assignment. I show them this presentation, student examples, then I give them the prompt: “create a blackout poem that represents one way YOU see the world.” As you can see by the main image for this post, students take the directions “black out” with a grain of salt. And I like it that way. I want these pieces to be dripping with each students’ voice and tone and self.

Even with very few criteria, some students still struggled with the assignment. Some felt limited by the criteria—

I was really into it…until the poem had to be about how I saw life. This became an obstacle. I was struggling to find something to put together. Especially with the page. I had I wasn’t able to really put something together until I forced myself to pick out something. It later became an assignment more than a work of creativity for me. —Victor

Victor’s words sting! I want to let students roam free with this assignment. Victor wanted to be free, but others might need a little more guidance, more limits. It’s an easy problem to solve. Make the criteria optional!

Lest anyone think this is a frivolous activity, well, let’s agree to disagree. I think we need more frivolity in education and many happen to agree. I’m still not frivolous enough! One of my playmates/mentors whose work reminds me of this fact is the ever fabulous Amy Burvall.

So that second link above is to a book I’m reading this summer by Geoffrey Sirc who argues that composition classes should look more like art classes, and he uses Duchamp, Pollack and other artists from the 60s’ Happening movement as models for what that might look like. I see novel blackout poetry as one take on Sirc’s “Student-as-Jackson-Pollock allegory. He quotes Robert Goodnough who says the composition classroom should not be “concerned with representing a preconceived idea, but rather with being involved in an experience of paint and canvas, directly.” Novel blackout poetry encourages students to “just put stuff together” (Sirc) and is a way of writing “which, ” John Cage says “comes from ideas, is not about them, but which produces them.”

Take this 16-year-old’s idea for instance:

It was like a blank canvas, except it was already filled in and you picked the things that you liked. —Trang

I like how the blackout poem really embodied the idea of creating your own work from something that was already written. —Celine

Novel blackout poetry also aligns nicely with the Common Core standards. I can help you there too.

It did help me appreciate The Catcher in the Rye more and especially Salinger’s writing style because writing the poem gave me a better understanding of Salinger’s word choice and also how he fit all of his words and ideas together. —Jesse

So as Amy Burvall says, let’s: 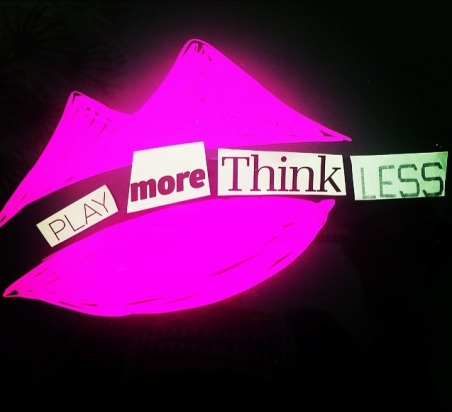 Sometimes I think our students’ learning is too fragmented. What if there was more collaboration across disciplines and students had the chance to demonstrate how they connected the dots, put all their learning together into one final product? Of course, they’d share their thinking and process along the way. I love John Green’s question: “is there a way that we can use this technology to build places for engagement, instead of just places for distraction? ” As Douglas Rushkoff has pointed out, yes the youth of today are digital natives, but they’re thoroughly worked over by social media. It’s not just the digital natives by the way. We all need to act more and not let ourselves be acted up, in other words: Program, Or Be Programmed. I’ve been stealing ideas from Austin Kleon for my classroom for about five years now and I’m thrilled to have other teachers join in the looting. Brad Ovenell-Carter started blogging his reading of Kleon’s new book Show Your Work over a month ago and since then I’ve been itching to join in the fray and blog my reading of his reading.

I’m starting 76 pages into Ovenell-Carter’s reading and that doesn’t bother me. It also doesn’t bother me that I’ll be working backwards and forwards as he continues. We’re getting all McLuhan on Kleon’s little book, ya hear!

I’m floored by flow of ideas and insight that this process encourages and I can’t wait to see how all these things will blossom, wilt, flower. Feel free to join in the conversation.

A note on the process: While I’m jealous of Ovenell-Carter’s hand-drawn work (and I dig his handwritting—those loops!),  I decided to differentiate our ideas by diving into a digital toolbox, namely Skitch for Evernote. Teaching is a science—that’s how it feels when I’m collecting and combing through student data looking for how to proceed next. Teaching is an art—that’s how it feels when I’m in front of the class trying to hook them in with an introduction to metaplasmus, zeugma and other rhetorical tropes, schemes. Wait, that sounds like science. That’s because teaching is both an art and science—especially when I’m deep in a stack of essays working to understand the thoughts and  arguments of students while at the same time helping them craft their way to clarity with cadence and rhythm.

Either way, teaching is a creative and rewarding effort. And ever since I stumbled upon 20% projects and the work of writer and doodler Austin Kleon it’s only become more creative and more rewarding as I’ve worked with students to do what Kleon calls for in his new book Show Your Work!

David Theriault, a colleague/cohort, and I have been obsessed with this idea of showing our work: making our classrooms transparent, our work and that of our students laid bare for the world to see.  Not to show off what we do in our class, but to try it out in public, share it, and hope in comes back new and improved. Thus our activity on Twitter and in the edublogosphere (wow, that’s an ugly word). We’ve brainstormed hashtags, schemed up entire books on the subject. We’ve read the books. We’ve encouraged other teachers in our district to do the same. We follow people with similar obsessions.

But nothing really gets to the heart of the matter like Kleon’s book, which just arrived in the mail yesterday! And it’s much more rewarding to take a breather from the pummeling of pedagogical jargon, kick back with this bright, rakish tome and dream up ways to twist and tweak Kleon’s principles for my curriculum, my class, my students. 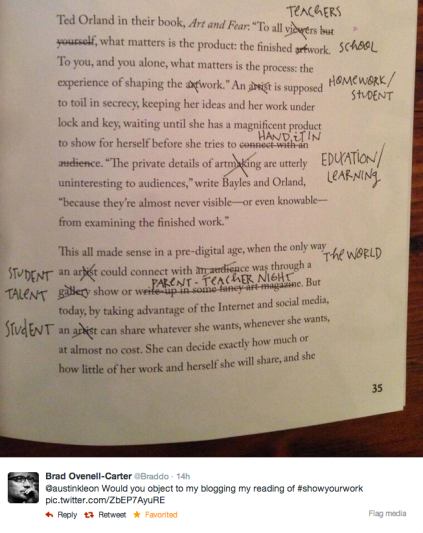 I’m not the only educator stealing from Kleon.

Consider this one example from Zara who realized that she writes the same way she plays volleyball: timidly. But as she writes you can see her writing grow more assertive. I can’t wait to see her on the court next year.

Do you want to see the rest of my students learning? Stay tuned here, here, or here.

Thanks for the alert @unclechicosbbq !!!
RIP Andrew Fletcher. He brought such a playful spirit to Depeche Mode—he always looked as if he was having the most fun of anyone in the band. ❤️to his family, friends, and fans.
After a year of figuring out how to build one of these, I got my first crossword published today. The link to solve it is in my bio (good today only). Enjoy!!
Shout out to @VANS in the #NYTXW. Let’s skate!!
Digging this #KeithHaring Uno deck. #skateboarding
It’s been a long two years! Welcome back #vanshb. I’m no @otto_hoffmann_ , but I’m still having fun w/ the old crew. 📸 @edmatusita
Loading Comments...